Having gained promotion to Surrey League 2 the season started extremely well with our first league win away against Worth Old Boys, a team that we have always managed to lose to even though we have always managed to outplay them. Following a further two league wins away to Old Abingdonians and at home to The London Fire Brigade we found ourselves unbeaten at the top of the league just above an unbeaten Mitcham on points difference. The next match being away against Mitcham saw the two unbeaten sides struggle against the inclement conditions in a hard and competitive match. Mitcham having the home advantage took their opportunities well and ended up the victors, winning 10 – 5.

A further two losses against Chipstead and Old Walcountians and an unexpected and well contested win against the new league leaders Reigate has left us at mid point in the table. With fixtures with many of the clubs below us still to come, we are confident that further wins are achievable to bring us into the top half of the table. 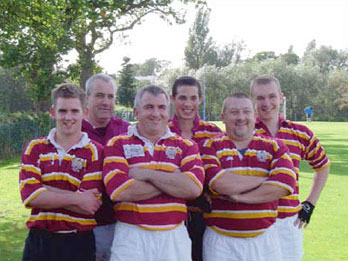 The second XV have been struggling to fulfil many of their fixtures this year due to a combination of unavailabilities and injury (as well as being too old). A memorable match did however take place against Bec Old Boys 3’s, when three father and son combinations took to the field (Mick & Ian White, David & Chris Ponting and Rob & Lawrence Davies). The combination of youth and experience saw the team win by an astounding 37 – 0. Congratulations and well done to all those who turned up for that game.

The Trustees generously sponsored Michael on his recent rugby tour to Canada with Glynn School.

To update you on his progress, Michael is still with the Harlequins Academy and is a regular player within the Surrey County U16 team. At the end of last season he was a member of the winning Surrey U15’s National 10’s tournament held over two days at the Rugby School and was presented with his medal by Sir Clive Woodward.

This season, following some dynamic games for Surrey against County opposition, he has successfully made it through the London & S.E. Regional trials and will be representing this team at regional level. We wish him all the best.